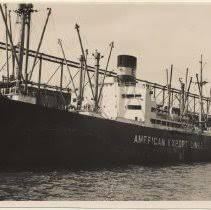 At 16 years of age I became a Merchant Marine, like my dad. That’s my first ship, Acting Deck Maintenance on the SS Exchester, Isbrantsen Lines in 1970. National Maritime Union. Its Jamacian Bos’n, was a mountain of a man. Sometimes he’d stop off a mooring line with his bare hands, while I rushed to make it fast. He had a heart of gold, but pulled no punches. He insisted I do the job I was being paid to do, even though I was not an “AB” (Able Seaman). Fear of heights caused me to freeze halfway up the mast on my first climb. He fixed that by saying: “Concentrate on what’s around you, and on what I will do to you if you fall and make a mess on my deck!” That worked.

Non-container (C2) ships like the Exchester are long gone from American fleets. Unlike today, it took days to unload cargo, leaving plenty of time to see the sights, romance the ladies. A sailor could really see the world back then, not like today where you just “see the sea”, 99% of the time.

While discharging cargo (Hoboken, Staten Island? Don’t recall.), Mate on Watch ordered me to supervise a hold. On purpose the Cargo Net was dropped causing breakage, loose bottles of expensive wine quickly vanished among the longshoremen. Their Union Rep. ambled alongside: “Did you see that Kid?” “No Sir!” I replied. “Good, that’s the way to stay healthy” he growled as he walked away.

Lots of time on ships to read. On one of them I happened upon the Jehovah’s Witnesses’ book “Evolution or Creation”. Convinced by its creationist arguments I decided to read their New World Translation of the Bible. The Word of God had a unique power over me, I was compelled to read it cover to cover and then again. I couldn’t put it down.

The time came when I was determined to become a JW. I was convinced they alone were God’s people, and everyone else belonged to “Babylon the Great.” I hastened to the San Pedro Kingdom Hall to be baptized. But they insisted I answer a question first, to see if I really understood JW beliefs.

“What do you believe about baptism”-the Elder asked. Immediately I paraphrased Romans 6:3-4 “We are buried with Christ, and we are raised with Christ!” That is the wrong answer, unless JWs believe you are one of the “144,000” anointed. They clearly did not believe I was because they insisted I complete discipleship indoctrination.

While at the public library researching I came upon “Apostles of Denial,” by Edmond C. Gruss. I was determined to prove his arguments against JW belief wrong. None of his arguments for the Deity of Christ were making sense to me. I blazed my way through his book, until I got where he argued the Holy Spirit must be a “Person” and not an impersonal force of God as JWs believe. He uses personal pronouns “I” “Me” and even commands the disciples to act for “Me”. When reading Acts 13:2 is was as if JW doctrines were like a house of cards, the collapse was truly great. I “knew” as the Holy Spirit says “I”, Me”, He is a “Person”:

As they were publicly ministering to Jehovah and fasting, the holy spirit said: “Of all persons set Barnabas and Saul apart for me for the work to which I have them.-Acts 13:2 New World Translation

I was devastated. I felt totally alone, “if the Jehovah’s Witnesses are not God’s people, who are?” [It didn’t occur to me the E. C. Gruss was!!!] I cried out in prayer to Jehovah, “please help me, I beg you! I can’t see who your people are!”. I was absolutely devastated, went about as if in a stupor. But Jehovah would not answer me.

One day a Baptist Radio minister was urging listeners to call in and confess “Jesus Christ is LORD” and that God “raised Him from the dead” publicly (Mat. 10:32) and you will be saved. “God does not lie,” and He promised:

That if thou shalt confess with thy mouth the Lord Jesus, and shalt believe in thine heart that God hath raised him from the dead, thou shalt be saved. (Rom. 10:9 KJV)

I rushed to the public phone in the lobby of the Amory Hotel. A few of my fellow sailors sat there socializing, they would overhear every word I said on the phone!” Then a thought appeared: “You don’t want to embarrass yourself in front of them! You’ll be a laughingstock!” I drove the thought away thinking: “I want Jesus to be my LORD more than life itself!”

That if thou shalt confess with thy mouth the Lord Jesus, and shalt believe in thine heart that God hath raised him from the dead, thou shalt be saved.
10 For with the heart man believeth unto righteousness; and with the mouth confession is made unto salvation.
11 For the scripture saith, Whosoever believeth on him shall not be ashamed. (Rom. 10:9-11 KJV)

I thanked him profusely and went to my room, stunned. As I was pondering these things I was “baptized in the Holy Spirit!”

God the Holy Spirit fell upon me like a warm wind, filling my soul regenerating it. The washing of regeneration (Tit. 3:5) renewed my spirit (Rom. 8:16), not my flesh body or brain (Rom. 7:18). My soul, the “ghost operating the machine” became a partaker of the divine nature (2 Pet. 1:4). God breathed into my soul the “breath of lives” and the filling gave rise to a “new creature” (Gen. 2:7; 2 Cor. 5:17), risen from the dead in Christ Jesus my LORD (Rom. 6:4). Over forty years ago this happened, and never has the Spirit left or forsaken me. God is more real to me than anyone or anything existing.

So why reveal my conversion experience? I never mention it otherwise. I will explain that near the end of this writing.

Therefore, Christians receive the same baptism, same Holy Spirit, the one seal of God’s approval, the same guarantee of our one inheritance after they believe (Eph. 1:13-14). But all receive different measure of power producing different gifts by the same Spirit (1 Cor. 12:4-30).

How much animating Spirit power is received is according to God’s will (Rom. 12:3-8). Only Jesus received the Holy Spirit without measure (John 3:34). The NT does not command believers seek “a second blessing”. It only admonishes repentance, turning from everything displeasing to God, and so be “filled with the Holy Spirit” (Eph. 5:18).

God appoints apostles prophets teachers etc. (1 Cor. 12:28-30), not us. Even on the Day of Pentecost, the time of maximum manifestation of God the Holy Spirit, each believer evidenced the Holy Spirit differently. For the 120 in the upper room (Acts 2:4), it was a spectacular event. For the 3,000 saved that day (Acts 2:41), it was just like any modern born again experience of the indwelling of the Holy Spirit (Acts 2:38-41). That the Holy Spirit was equally in both groups is evident by their common changed heart and devotion to God’s truth (Acts. 2:42-47). Notice, the 120 didn’t do any signs and wonders, only the Twelve Apostles (Acts. 2:43). [Later Paul was added to the Twelve (2 Cor. 12:12), only they did the signs proving they spoke the “infallible Word of God.” When they went to the LORD, the Bible was completed (Rev. 22:18-21).

The NT gift of tongues does not exist today, it ceased about 70 AD. Coincident with the greatest sign unbelieving Jews could receive, the destruction of the Temple in Jerusalem (Mat. 24:2; 1 Cor. 14:22). Those who walked with Jesus in the 1st century, who declared they had “sold all they owned, even their lives” by being baptized (which made them hated by their fellow Jews), manifested the signs listed in Mark 16:15-20. Mark says this prophecy was fulfilled in the 1st century, by these unique believers.

26 How is it then, brethren? Whenever you come together, each of you has a psalm, has a teaching, has a tongue, has a revelation, has an interpretation. Let all things be done for edification.
…
36 Or did the word of God come originally from you? Or was it you only that it reached?
37 If anyone thinks himself to be a prophet or spiritual, let him acknowledge that the things which I write to you are the commandments of the Lord.
38 But if anyone is ignorant, let him be ignorant. (1 Cor. 14:26, 36-38 NKJ)

As the word of God did not originate through any Corinthian prophecy, tongue, knowledge given by God, it was not one bit more inspired than what believers have done every age of the church.

Therefore, what was happening in Corinth (except for Tongues which have ceased), is also happening in Bible believing non-Pentecostal churches today, although some are uncomfortable with calling their expository preaching and teaching “prophecy”, they certainly are “forth telling” the inspired Word of God. Like Corinthian prophecy if their message is later amended it doesn’t become “false prophecy” when others correct it (1 Cor. 14:29-33).

The canon is closed today, God’s revelation is contained exclusively in the canon of 66 books that alone are universally received in the Christian Church, Orthodox, Catholic or Protestant.

So why reveal my conversion experience? I never mention it otherwise. Only to rebut the slander against Cessationists, that only those who never experienced God’s power believes it. The Bible teaches it, that’s why we believe it.

Perhaps God permitted I perceive the spiritual changes every born again believer goes through when they believe, so I could rebut the slander against Bible believers when they deny babbling like loons, barking like dogs or writhing like snakes has anything to do with the Holy Spirit of God. Only the lawless believe the Spirit of Christ would inspire any of those things (Mat. 7:22-23).

I am a prophet equal to any Bible believing pastor, preacher or teacher faithful to God’s Holy Word the Bible.

AND I do have “a word” for those would dishearten God’s people, claiming they lack Holy Spirit:

22 “Because with lies you have made the heart of the righteous sad, whom I have not made sad; and you have strengthened the hands of the wicked, so that he does not turn from his wicked way to save his life.
23 “Therefore you shall no longer envision futility nor practice divination;
for I will deliver My people out of your hand,
and you shall know that I am the LORD.”‘” (Ezek. 13:22-23 NKJ)

But thus saith the LORD to His people:

3 Do not let the son of the foreigner
Who has joined himself to the LORD Speak, saying,
“The LORD has utterly separated me from His people”;
Nor let the eunuch say, “Here I am, a dry tree.”

4 For thus says the LORD: “To the eunuchs who keep My Sabbaths, And choose what pleases Me, And hold fast My covenant,

5 Even to them I will give in My house And within My walls a place and a name Better than that of sons and daughters; I will give them an everlasting name That shall not be cut off.
6 “Also the sons of the foreigner Who join themselves to the LORD, to serve Him, And to love the name of the LORD, to be His servants– Everyone who keeps from defiling the Sabbath, And holds fast My covenant–
7 Even them I will bring to My holy mountain, And make them joyful in My house of prayer. Their burnt offerings and their sacrifices Will be accepted on My altar; For My house shall be called a house of prayer for all nations.” (Isa. 56:3-7 NKJ)

Now a word from our Sponsor:

For all your local transportation needs call Yellow Cab of Hemet and San Jacinto. Open 24/7, we feature the lowest starting rate in the USA, only $1.00 to start. Visit or website at:
www.yellowcabhemet.com