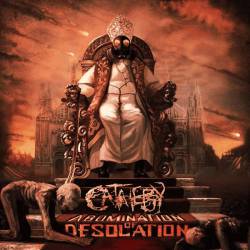 “Therefore when you see the`abomination of desolation,’ spoken of by Daniel the prophet, standing in the holy place ” (whoever reads, let him understand). (Mt. 24:15 NKJ)

The “abomination of desolation” (Dan. 11:31) is an idolatrous abomination in a holy place driving God’s presence out (Ezek. 8:6), causing it to be uninhabited “desolate”. The end-time abomination is the apex of apostasy (Dan. 8:13; 12:11), its different than the image Antiochus set up because the “Desolator” himself is imaged by the abomination (2Th. 2:3-4) and its given life via demonic arts (Rev. 13:14-17).

Both Matthew (Mt. 24:15) and Mark (Mk. 13:14) focus on the end time “abomination of desolation”. Luke writing to Gentiles points to the 1st century fulfillment (Lk. 21:20). He speaks only of the “desolation” of Jerusalem (which would include the Temple) and not the “abomination of desolation”. The likely reason is God already left the Temple decades prior to its destruction, it was already “desolate” well before its destruction. About 40 years prior the NT church became the “Temple of God” having God’s presence. Therefore, the actual “abomination of desolation” AKA the “finish of transgression” (“complete the rebellion”, CEB) was the crucifixion. It capped off the rebellion of man against God. That abominable act caused God to leave the Temple’s Holy of Holies (Dan. 9:24, 26. Mt. 27:51. Cp. 1 Kings 19:11).

But this does not deny the 1st century had a lesser fulfillment those hearing Christ would easily discern:

Unlike Jesus’ “hearers”, “readers” in the end time must carefully analyze the prophecy in Daniel.

End-time context is required. Christ predicted the literal temple would be destroyed (Mt. 24:2), never hinting it would be rebuilt. Those who reason “the daily” sacrifice requires a functioning Jewish Temple forget one thing, the New Covenant in Christ’s blood is in effect after the resurrection of Jesus. The only functioning Temple of God in the New Covenant is the Church. It alone has the “royal priesthood” (1Pt. 2:9), it alone offers the “daily sacrifice” as it alone has the presence of God. See Does Scripture anticipate another Jewish Temple Any Temple built in the end time by Christ rejecting Jews or followers of the Antichrist would not be called the “Temple of God” by Paul.

3 Let no one deceive you by any means; for that Day will not come unless the falling away comes first, and the man of sin is revealed, the son of perdition,
4 who opposes and exalts himself above all that is called God or that is worshiped, so that he sits as God in the temple of God, showing himself that he is God. (2 Thess. 2:3-4 NKJ)

As Temple of God refers to the Church, the “Daily” is the “continual offering of ourselves to God” (Rom. 12:1). When the fallen away Church receives the abomination “man of sin” as the Christ the Daily “continual sacrifice” is taken away by their apostasy. But the presence of God in the Elect of the Church, true Christians remains. When the Man of sin proclaims himself God at 1,260 days (Dan. 12:7), he is the abomination of desolation Jesus warned about.

15 “Therefore when you see the `abomination of desolation,’ spoken of by Daniel the prophet, standing in the holy place ” (whoever reads, let him understand),

16 “then let those who are in Judea flee to the mountains.

17 “Let him who is on the housetop not go down to take anything out of his house.

18 “And let him who is in the field not go back to get his clothes.

20 “And pray that your flight may not be in winter or on the Sabbath.

21 “For then there will be great tribulation, such as has not been since the beginning of the world until this time, no, nor ever shall be.

22 “And unless those days were shortened, no flesh would be saved; but for the elect’s sake those days will be shortened. (Matt. 24:15-22 NKJ)

His abominable image is soon to come. Believers worldwide they are commanded to flee Babylon the Harlot which is what the organized Church has become (Rev. 11:1-2). That desolates the visible church, no longer the “temple of God” as God’s presence leaves with His Elect. Its full destruction is soon to come.

The Beast requires another 30 days (Dan. 12:11) to fully set up his the abominable Image that is alive via demonic arts (Rev. 13:15)”. This provides a very short time for believers flee Judea to the mountains or Edom and Moab (Mt. 24:16-20; Dan. 11:41). His slaying Moses and Elijah at his “revelation” was the start of the Great Tribulation, but the delay setting up his abominable image provided a short window to escape. For 45 days (1, 290 to 1,335 Dan. 12:11-12) the Great Tribulation rages and then the church raptured. God shortened the days (Mt. 24:21-22) but its unlikely God would change anything scripture predicts to accomplish this. Likely it means the 45 would have been more without shortening. There will be some elect to rapture (Rev. 14:12-16).

Lets go over this in detail. Christ pointed to Daniel 12:11 (LXX), it is the only place where the exact phrase τὸ βδέλυγμα τῆς ἐρημώσεως occurs. As this abomination rises 3 ½ years AFTER the “daily” was taken away it is not the same abomination in Daniel 9:27 or Daniel 11:31. Both the Greek Septuagint and Masoretic Hebrew imply the great transgression/apostasy of God’s people caused the “Daily” to be taken out of the way (868 ἀφίστημι aphistemi ; 05493 סוּר cuwr ).

In Daniel 8:13 what happens in the end time is called the “transgression (06588 פֶּשַׁע pesha`) of desolation”, “the rebellion that causes desolation” (NIV). When the Abomination rises, out goes God’s Elect in whom the presence of God is. Perhaps Paul’s “son of destruction” (υἱὸς τῆς ἀπωλείας (2Th. 2:3) Hebraism (a class “of destroyed ones” like Judas Iscariot John 17:12) points to his complete destruction (03617 כָּלָה ), compare the desolation poured out on the Desolator in Daniel 9:27, also 2 Thessalonians 2:8.

To get the correct picture of the end time it will be necessary to combine various translations, none of them have this section 100% correct:

9 A single, very small horn came out of one of the four horns. It grew bigger and bigger, stretching toward the south, the east, and the beautiful country. (Dan. 8:9 CEB)

10 It grew as high as the heavenly forces, until it finally threw some of them and some of the stars down to the earth. Then it trampled on them. (Dan. 8:10 CEB)

11 It grew as high as the very leader of those forces, taking the daily sacrifice away from him and overturning his holy place. (Dan. 8:11 CEB)

12 The army of heaven was restrained from responding to this rebellion. So the daily sacrifice was halted, and truth was overthrown. The horn succeeded in everything it did. (Dan. 8:12 NLT)

13 I then heard a certain holy one speaking. A second holy one said to the first one: “How long will this vision last– the one concerning the daily sacrifice, the desolating rebellion, and the handing over of the sanctuary and its forces to be trampled?” (Dan. 8:13 CEB)

14 He said to me, “For two thousand three hundred evenings and mornings. Then the sanctuary will be restored.” (Dan. 8:14 CEB)

Luke 21:20-24 applies to the 1st century only, its listing with the dual prophecy of Matthew and Mark notwithstanding.