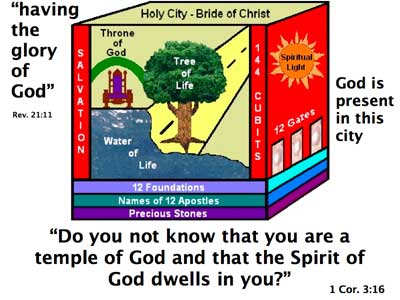 Will the Temple in Jerusalem be rebuilt, a “third Temple” or will the Antichrist sit in the Church the Temple of God?

3 Let no man deceive you by any means: for that day shall not come, except there come a falling away first, and that man of sin be revealed, the son of perdition;
4 Who opposeth and exalteth himself above all that is called God, or that is worshipped; so that he as God sitteth in the temple of God, shewing himself that he is God. (2 Thess. 2:3-4) KJV

Arguments for the Temple of God being the Church:

1) As Matt. 24:2-3 associates the destroyed Temple with the time of Christ’s coming, therefore it won’t be rebuilt before He comes.

2)In John 4:21 Christ likens the fate of the Temple in Jerusalem to that of the Samaritan Temple that lay in ruins as He spoke, saying the time would come (about 40 years later) when the Father would never again be worshiped in either Temple. Therefore, even if the Temple in Jerusalem is rebuilt by unbelieving Jews or antichrists, it would not be a “temple of God”.

4) Only the literal temple in Jerusalem could be God’s Dwelling (naos) to “Pharisee Paul” (Acts 23:6), but he consistently calls the Church the “Temple of God” (1 Cor. 3:16-17; 6:19; 2 Cor. 6:16; Eph. 2:21). This implies “Apostle Paul” has undergone a deep and permanent change in perspective that would prevent any casual switch in reference, with no explanation.

The only other times Paul spoke about a physical temple were in 1 Corinthians 9:13, Acts 25:8 and Acts 17:24. In 1 Corinthians 9:13 and Acts 25:8 he uses the word “hieron” (G2411) specifically to refer to the physical temple in Jerusalem. In Acts 17:24, however, he is quoted as using the word “naos” to refer to physical temples in general, however his entire point was that it was no longer a physical temple in which God dwells. Why? Because the Church was now that temple. In these instances where Paul spoke about a physical temple he never referred to it as “the temple of God” or an equivalent expression.-ICA (David Wood) 03/13/2011, MidnightWatcher’s Blogspot.
https://midnightwatcher.wordpress.com/2011/03/13/2-thessalonians-24-a-rebuilt-jewish-temple-or-something-else/

6) Thessalonica was populated by Macedonians and Romans, gentiles (1 Thess. 1:9) who had little awareness of events in faraway Jerusalem. Yet Paul speaks of an apostasy leading up to events in the Temple as though the Thessalonians would have full awareness as these occur. Therefore, the “temple of God” must be the Church for it alone has the required property of Thessalonian “awareness.”

Paul seems to have in view false teachers who deviated from apostolic truth teaching their own doctrines. Hence they lost all reward for their works, when the fire of God’s judgment inspects them they barely escape the flame as if from a burning house, stripped of everything that might have merited reward (1 Cor. 3:15.) But Paul’s object changes, from plural men to a single man as though he has someone in particular in mind: “If any man defile the temple of God, him shall God destroy, for the temple of God is holy, which temple ye are” (1 Cor. 3:17)

Clearly he has in view the “man of sin”, the miracle working False Christ Man defiling the Temple of God, “which temple ye are” with aberrant Christianity. The “destruction” threatened confirms this, in 2 Thess. 2:3 the “man of sin” is named the “son of destruction” because he will merit everlasting destruction in the lake of fire (cp John 17:12).

This “man of sin” “son of destruction” connection is manifest in the Old Testament:

In Isaiah 57:4 the “children of transgression” are also ‎ זֶ֥רַע שָֽׁקֶר “seed of falsehood” (KJV); “offspring of liars” (NIV); “a lying race” (NJB)

Therefore, “temple of God” in 2 Thess. 2:4 is the church the miracle working man of sin will defile with his aberrant Christianity. A literal temple in Jerusalem cannot be similarly defiled.

Arguments why temple of God cannot be the church.

Ad Hominem, circular, begging the question. Its educational the opposing side uses the same argument:

As God’s residence of old was in the temple of Jerusalem, so he, as God, sitteth in the temple of God: not that temple that was built by Solomon, and afterwards rebuilt, and to be built again, as the popish doctors speak: for it is now destroyed, and if it be built again by this man of sin, as they say, at his coming, would the apostle call that the temple of God? 2 Cor. 6:16; Rev. 3:12, &c.-Poole, M. (1853). Annotations Upon The Holy Bible (Vol. 3, p. 760). New York: Robert Carter and Brothers.

Paul calls the “revelation” (ἀποκαλύπτω) of the “lawless one” a “coming” (παρουσία), this is a parody of Christ’s coming to His church, “False Christ in parody of True Christ” therefore calling an apostate Church “the temple of God” is in keeping with OT usage of “Israel, Zion” etc. where a fallen away people did not lose their “title” even though apostate. The presence of TARES in the church does not change its identity as “God’s field” even when both grow together until the harvest (Matt. 13:30, 36-42).

Arguments 1-8 below are from Professor John Eadie’s Commentary on the Greek Text of the Epistles of Paul to the Thessalonians. (W. Young, Ed.) (pp. 271–272). London: Macmillan and Co.

(1) There is no allusion in the context to believers as being God’s temple, but in the text quoted believers are directly asserted to constitute it.

(2) The sitting in the temple does not harmonize so fully with the notion of an ideal or spiritual structure. The citations adduced by Alford are scarcely in point, as 1 Cor. 6:4 where, ἐν τῇ ἐκκλησίᾳ occurring, the meaning is evident, and the clause signifies, set them as judges for a definite purpose; Matt. 23:2, where sitting in Moses’ chair is without ambiguity; and the image is as evident in Rev. 20:4. The places where Jesus is said to sit on the right hand of God are not in analogy; his royal seat is the symbol of highest exaltation and of universal dominion.

Fallacy of accent. “He as God sitteth in the temple of God” (kjv) therefore Alford is correct, its figurative of Divine authority:

(3) If the temple of God be the church, what is meant by the Man of Sin entering and seating himself in it, what is the position which he thus occupies, what is his locality? for he is no ideal usurper, no personified evil influence, but a man with human conditions.

See #2 directly above, same Fallacy of accent. He sits as God figuratively in the figurative Temple of God the Church. Neither are literal.

(4) Could those for whom the epistle was written easily understand by the phrase the Church of Christ; or would not their first and most natural conclusion be that the Man of Sin was to intrude into some actual edifice, set apart to God as His shrine, like that at Jerusalem, and appropriate it.

Circular Argument begging the question entirely as its clear from Paul’s consistent application of “Temple (naos) of God” to the church proves.

(5) The next clause, “Showing that He is God,” leads to the same conclusion—he that sits in God’s temple takes God’s place and prerogative, for the temple is His dwelling—a conclusion which could not have the same force and evident connection with the premises, if the temple were the church so symbolized, for the usurpation would in that be more directed against Christ, the Head of the Church, or the Holy Spirit who fills it.

Hasty Generalization Fallacy Ignoring surrounding context. The man of sin appears to an already fallen away church with all power signs and wonders that serve the lie he is the Christ. The energy of Satan inworking is an energy of error that deludes the apostate church to descend into even more lawlessness. As they do not love God’s truth Holy Scripture they have no means of discerning the spirits. At mid-week he casts off all trappings of Christianity and morphs into the Son of Destruction, denying the Father and the Son (1 John 2:18-23) elevating himself above all called God. He continues to work signs and wonders that serve that lie. A Jewish Temple is foreign to this context.

(6) Were the Church to permit such intrusion, and such impious self-assumed exaltation on the part of the Man of Sin above all divine persons and worship, it would cease to merit the appellation of the temple of God, and also on account of the previous apostacy which made such self-deification possible.

False Cause Fallacy. Self-deification isn’t dependent upon the fallen away church. Its dependent upon the unrestrained working of Satan in all power, signs and wonders serving the lie the man of sin is the Christ and his gospel of lawlessness divinely approved. Then at mid-week casting off all trappings of religion he declares himself above everything called God or worshiped becoming the Son of Destruction Beast Antichrist, denying the Father and the Son (1 John 2:18-23).

(7) The entire prophecy is distinct and personal, of prosaic and plain directness in its description of a man possessing a certain character, bringing on himself a certain destiny, and as he is at length to be consumed by the Lord at His Second Advent; may it not therefore be said that it would be out of harmony with this literal style of prediction, if in the midst of it should occur an unfamiliar image as the name of a place which is the scene of a usurpation without parallel?

Fallacy of Misleading Context. That is a distorted view of the text which does not mention an image, it speaks of a man who figuratively sits down as God in the church working signs and wonders that serve that lie.

(8) This is also the earliest interpretation. Irenæus says expressly, “Besides he has also pointed out, which in many ways I have shown, that the temple in Jerusalem was made by the direction of the true God. For the apostle himself, speaking in his own person, distinctly calls it the temple of God … in which temple the adversary shall sit, trying to show himself off as Christ.

Argumentum Ad Verecundiam appeal to authority and hasty generalization fallacy as the “earliest interpretation” necessarily dates from the 1st century, not the second century. Alas, those early writings are mostly lost to us.

That ends Professor JOHN EADIE’S arguments. There are others which I will treat at a later time.

The Third Temple: Does scripture anticipate a future Jewish Temple?
The Two Phases of Antichrist: Man of Sin & Son of Destruction
The Daily Sacrifice shall be taken away—Daniel 12:11
The Seventy Weeks in Daniel 9 Explained
The Antichrist: His Names Titles and Descriptions
What did the apostle John reveal when he said: “It is the last hour”?
Where Is The Judgment Of Fallen Angels?
Do Ancient Aliens Appear in the Bible?
The Coming False Christ and His Followers Revealed
The Free Speech forum where you can share your ideas