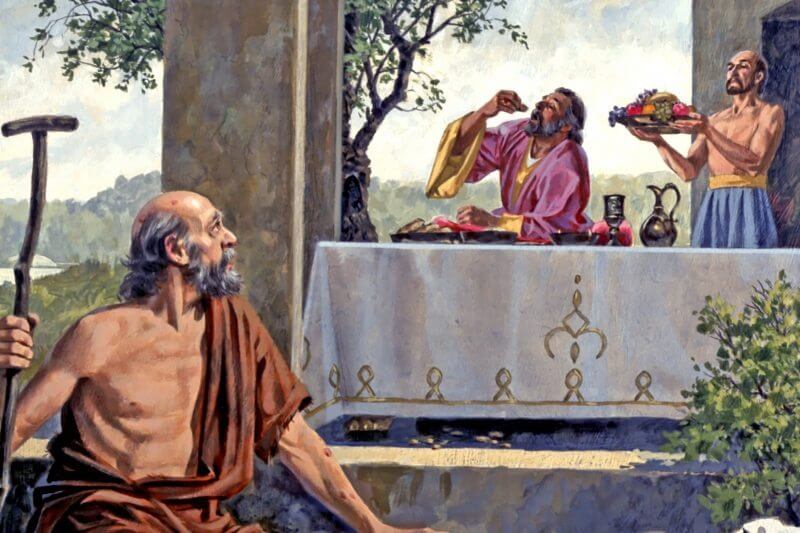 Will the Rich man burn in hell forever? Does the Lazarus and the Rich Man parable teach eternal torment with no possibility of parole? Not if we interpret as Jesus meant it. Then the Rich Man’s torment ends when he repents. How do we know this? “Reversal” is the “cause” of what exists in Hades (Lk. 6:25), a “correlation” governs what the Rich Man receives.

While alive the Rich Man lived in paradise with plenty to spare yet failed to aid Lazarus at his gate who was in anguish from want and experienced only bad things while alive. To balance the scales, Lazarus now enjoys paradise with plenty to spare but is not permitted to aid the Rich Man in anguish from want in Hades and experiencing only bad things while dead.

Wait a minute, then Lazarus’ time in paradise is limited by time the Rich Man was alive!

Not so, and the reason why is found in the greater context. God is just:

He is the Rock, his work is perfect: for all his ways are judgment: a God of truth and without iniquity, just and right is he. (Deut. 32:4 KJV)

Moreover, this fits the purpose of the parable, to warn those who are like the rich man, not to advocate the lifestyle of Lazarus. The correspondence is cited to the Rich Man while Lazarus fades into the background, therefore it establishes what the rich man receives. Factor in the beliefs of Jesus’ audience and the possibility this parable teaches eternal torment is zero.

Jewish Beliefs about Hades in the Time of Christ

Jesus’ audience would have interpreted Lazarus and the Rich Man as literally as possible. They used the terms “Gehinnom” and “Hades” synonymously much as did the KJV which translated both as “hell”.

1.) Jesus contradicted Pharisee belief Abraham would save them from Hades:

22 “So it was that the beggar died, and was carried by the angels to Abraham’s bosom. The rich man also died and was buried.
23 “And being in torments in Hades, he lifted up his eyes and saw Abraham afar off, and Lazarus in his bosom. (Lk. 16:22-23 NKJ)

‘In the Hereafter Abraham will sit at the entrance of Gehinnom and will not allow any circumcised Israelite to descend into it.).-Abraham Cohen, Everyman’s Talmud, (Schocken Books, NY, 1995), pp. 381.

2.) Jesus contradicted travel from Hades to Abraham’s bosom is possible

26 `And besides all this, between us and you there is a great gulf fixed, so that those who want to pass from here to you cannot, nor can those from there pass to us.’ (Lk. 16:26 NKJ)

The third class will descend to Gehinnom and cry out (from the pains endured there) and then ascend; as it is said, “I will bring the third part through fire, and will refine them as silver is refined, and will try them as gold is tried; they shall call on My name and I will hear them” (Zech. xiii. 9). Concerning them Hannah said, “The Lord killeth and maketh alive, He bringeth down to Sheol and bringeth up” (1 Sam. ii. 6). A. Cohen, Everyman’s Talmud, (Schocken Books, NY 1995), p. 377.

3.) Jesus contradicted Abraham can help the tormented in Hades:

24 “Then he cried and said,`Father Abraham, have mercy on me, and send Lazarus that he may dip the tip of his finger in water and cool my tongue; for I am tormented in this flame.’ (Lk. 16:24 NKJ)

Those whose merits and demerits are equal remain in a middle state, and the intercession of meritorious men such as Abraham saves them and brings them into paradise (Testament of Abraham, A. xiv.). According to the sterner doctrine of the Shammaites, these souls must undergo a process of purgation by fire; “they enter Gehenna, swing themselves up again, and are healed.” This view, based upon Zech. 13:9, seems to be something like the Christian purgatory.-Singer, I. (Ed.). (1901–1906). The Jewish Encyclopedia: A Descriptive Record of the History, Religion, Literature, and Customs of the Jewish People from the Earliest Times to the Present Day, 12 Volumes (Vol. 5, p. 217). New York; London: Funk & Wagnalls.

Lazarus and the Rich Man are part of Jesus’ response to the Pharisees rejecting His authority to teach (Lk. 16:14-18).They are the main targets. The Rich Man doesn’t fit the Pharisee profile, although he is a Jew calling Abraham “father”, he’s depicted as a secular Jew living large like a rich Roman ruler.

The Pharisees believed health and wealth indicated God’s favor, like a foretaste of the hereafter. They would consider Lazarus cursed by God because he lay crippled and diseased at the Rich Man’s gate.

8 The master commended the dishonest manager for his shrewdness. For the sons of this world are more shrewd in dealing with their own generation than the sons of light.
9 And I tell you, make friends for yourselves by means of unrighteous wealth, so that when it fails they may receive you into the eternal dwellings. (Lk. 16:8-9 ESV)

The argument begins when Jesus praises the Steward’s shrewdness and diligence seeking his own interest, saying the “sons of light” should manifest the same “entrepreneurial zeal” seeking converts to the kingdom. Then when they die angels will receive them into eternal dwellings (Lk. 16:9, 22). But everyone must make a choice, can’t serve God and money:

13 “No servant can serve two masters; for either he will hate the one and love the other, or else he will be loyal to the one and despise the other. You cannot serve God and mammon.”
14 Now the Pharisees, who were lovers of money, also heard all these things, and they derided Him. (Lk. 16:13-14 NKJ)

The Pharisees saw wealth as God’s blessing, proof they were serving Him correctly. In context Jesus had been alluding to their traditions for a while, this was the proverbial “last straw”. Now they openly rejected Christ’s messianic authority, mocking Him.

Christ’s answer (Lk. 16:15-18) affirms His authority (predicted by Moses Deut. 18:15 and accepted by the people) and points to proof the Pharisees justify themselves but God knows their hearts. Christ cites God’s original standard there be no divorce (Mt. 19:3-9) as proof against the Pharisees (Mk. 7:9-13). This issue was intensely debated in Jesus’ day and many believed as Christ taught (including the Sadducees), while the Pharisees said a woman can be divorced even if she cooked a bad meal .

Christ’s parable is about a Rich Man who lives like a Roman. He clearly is a secular Jew not heeding the Law regarding charity to the poor. That God is not with him would be discerned by the audience, and that is proof the “health and wealth prosperity doctrine” of the Pharisees is clearly wrong. The Rich Man wasn’t being “helped by God” (as the name Lazarus means), he ends up in Hades.

Jesus also contradicted Pharisee belief Abraham sat at the gate of Hades and would not permit any circumcised Israelite descend into it. Not only would Abraham NOT stop their descent, he could do nothing to lessen torment in hell.

Therefore, Lazarus and the Rich Man is how Jesus warned everyone listening, but especially the Pharisees not to reject His Messianic authority. If they do, they will go to Hades contrary to their beliefs. Its a warning not one jot or tittle of God’s curses against those who idolatrously commit adultery, would fail to be fulfilled (Mt. 5:18-20 cp. Deut. 28:15-68)

So Luke 16:18 is Exhibit A the Pharisees justify themselves but their hearts are far removed from God. This confirms Christ’s Messianic authority to teach (Mat. 19:3-9. Mal. 2:13-16). Among the sins the Pharisees were guilty of, is their idolatrous love for money which is akin to spiritual adultery. If they don’t repent, then what happened to the Rich Man, will happen to them. Evidently, this warning stopped their mocking, we don’t read them responding to the parable.

Here is an example of how the Pharisees made the Word of God of none effect, dealing treacherously with the wife of their youth (Mal.2:14-16). It clearly delegitimizes them as representatives of God:

Internal evidences the rich man is not eternally lost

The Rich Man’s request only for “water to cool my tongue” (Lk. 16:24) suggests he saw his predicament as temporary, not eternal.

Luke 16:26 reveals some desired to help the Rich Man, therefore the Rich Man could not be irredeemably ungodly: “Shouldest thou help the ungodly, and love them that hate the LORD? therefore is wrath upon thee from before the LORD. (2 Chr. 19:2 KJV)

24 “Then he cried and said,`Father Abraham, have mercy on me, and send Lazarus that he may dip the tip of his finger in water and cool my tongue; for I am tormented (3600 ὀδυνάω odunao) in this flame (5395 φλόξ phlox).’
25 “But Abraham said,`Son, remember that in your lifetime you received your good things, and likewise Lazarus evil things; but now he is comforted and you are tormented (3600 ὀδυνάω odunao).

It is eisegetical the Rich Man is suffering eternal “torment”, rather we see a man chastened who recognizes he deserves it, and knows its temporary. He’s rational, conversational, asking only for minor relief to cool his tongue. That would not be the case if her were suffering eternal torment.

[931 βάσανος basanos] “A touchstone, a black siliceous stone used to test the purity of gold, silver and other metals, hence any test or criterion by which the qualities of a thing are tried. Metaphorically meaning instrument of torture by which one is forced to divulge the truth, examination, trial by torture.”-Zodhiates, S. (2000). The Complete Word Study Dictionary: New Testament (electronic ed.). Chattanooga, TN: AMG Publishers.

The Rich man is conversational, rational, not hysterical and screaming as if being tortured. Therefore, it is eisegetical we interpret “”this place of torment” as a torture chamber causing uncontrollable screaming.

And I will put this third into the fire, and refine them as one refines silver, and test them as gold is tested. They will call upon my name, and I will answer them. I will say, ‘They are my people’; and they will say, ‘The LORD is my God.'” (Zech. 13:9 ESV)

According to the sterner doctrine of the Shammaites, these souls must undergo a process of purgation by fire; “they enter Gehenna, swing themselves up again, and are healed.” This view, based upon Zech. 13:9, seems to be something like the Christian purgatory.-Singer, I. (Ed.). (1901–1906). The Jewish Encyclopedia: A Descriptive Record of the History, Religion, Literature, and Customs of the Jewish People from the Earliest Times to the Present Day, 12 Volumes (Vol. 5, p. 217). New York; London: Funk & Wagnalls.

This explains why Lazarus is named, and the Rich Man not. Lazarus means “God helped”. Evidently, the trials he went through when alive, made him ready to enter paradise. The Rich man had no help from God, he ends up in Hades.

But as a child of Abraham, the gifts and calling of God are irrevocable. Even if he died an enemy of the Gospel of Christ, yet out of Zion his deliverer would come and “all Israel will be saved” (Rom. 11:26-33).

See Postmortem evangelism for more on this.

[1]Some might argue for an independent “reversal”. Lazarus is consoled, and the Rich man is in anguish independently. Nothing connects the two. The “lifetime” limitation remains but the “repentance” aspect is lost. However, the juxtaposition argues against that equation because why mention Lazarus at all? Clearly it is a warning the Rich Man’s lack of charity toward Lazarus was sinful and why the Rich Man suffers anguish in Hades. How long Lazarus suffered is then pertinent to how long the Rich Man must suffer.