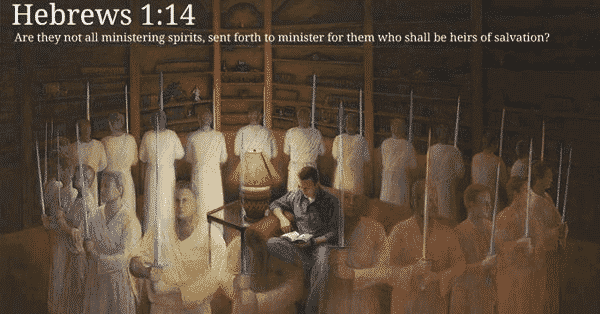 If the greatest trick of the Devil was “to convince the world he does not exist” perhaps the second was “angels are immaterial spirits”. But what of the equation “angels are spirits” in Heb. 1:13-14, is this not the locus classicus for the biblical definition of their nature?

13 But to which of the angels said he at any time, Sit on my right hand, until I make thine enemies thy footstool?
14 Are they not all ministering spirits, sent forth to minister for them who shall be heirs of salvation? (Heb. 1:13-14) KJV

The fact that it is here an ἅπαξ λεγόμενον* ought to restrain us. The context does not give us any compelling reason for calling angels πνεύματα… The essential determination of πνεύματα is not the fact that they are πνεύματα, but the fact that they are λειτουργικὰ πνεύματα, i.e., incomprehensible beings which have a sacred office. And as the bearers of this office they are εἰς διακονίαν ἀποστελλόμενα, i.e., despatched to fulfil this office.”-Barth, K., Bromiley, G. W., & Torrance, T. F. (2004). Church dogmatics: The doctrine of creation, Part 3 (3rd ed., Vol. 3, p. 453). London; New York: T&T Clark. *hapax legomenon: occurring only once.

Let’s be “Devil’s advocate” and presume the equation “angels are spirits” proves their inferiority to the Son, His immortal Spirit superior to their “mortal spirit?”

Is this what Christians believe?

There was a belief in some rabbinic schools that “every day God creates a new company of angels who utter a song before him and are gone.” “The angels are renewed every morning and after they have praised God they return to the stream of fire from whence they came.” 4 Esdras 8:21 speaks of the God “before whom the heavenly host stand in terror and at thy word change to wind and fire.” A rabbinic homily makes one of the angels say: “God changes us every hour. … Sometimes he makes us fire, at other times wind.” That is what the writer to the Hebrews means when he talks of God making his angels wind and fire.- Barclay, W. (Ed.). (1975). The Letter To The Hebrews (p. 19). Philadelphia: The Westminster John Knox Press.

Preferring the KJV/LXX reading “maketh his angels spirits” doesn’t help, we must still wonder how they are literally both at the same time. Better still, how can they be “spirits and flames of fire” while enjoying a burger with Abraham (Gen. 18:5-8)?

Therefore, the equation “angels are ministering spirits” is metonymy for ministering in quick and willing spirit, and not reference to their nature at all. Being servants of God its obvious they cannot be God the Son’s equal.

What of the theory angels materialize physical forms to appear physical on earth? That is the grossest violation of Occam’s Razor possible, scripture never remotely teaches it. Moreover, Godlike creative ability necessary to create living bodies is a creative ability God declares He alone has (Deut. 32:39 cp. 2 Ki. 5:7).

Why do I bring this up?

The apostasy scripture describes in the end time isn’t a localized event, restricted to one or two denominations. Its earth wide, all called God or worshiped are rebelled against (2 Thess. 2:3-4) therefore includes all the world’s religions, Hinduism, Islam, Christianity, all of them.

What event could convince the world to cast off their religion? A UFO invasion, the landing of extraterrestrial preachers claiming they are mankind’s designers, that Jesus, the Father and all others called God or venerated also of an extraterrestrial race. Some friendly, some not.

Not only will creationist arguments for intelligent design become apologetic for “the extraterrestrial Designers”~, every religious holy book has accounts that can be interpreted to describe extra-terrestrial visitation. In the face of a UFO arrival could anyone successfully argue its eisegesis? When fallen angels (called “Nephilim” in Genesis 6:1-4) appear among mankind claiming they are extraterrestrial benefactors returning to “ascend mankind” to the next level, wouldn’t new age euphoria sweep the planet? Without a doubt. Moreover, there will be a corresponding disdain and desire for “revenge” against those who exploited them in the name of “false religion.”

Christians will be blindsided, their Teachers didn’t warn them Satan could do that~*. Scripture did, but few paid heed. God is sending a strong delusion, its not something easy to refute, its a Satanic inworking “energy of error” that will be impossible to withstand if experience is the criteria for truth, and not Holy Scripture. And belief in the reliability of scripture is precisely what has been undermined by Christendom’s own scholars these last few hundred years. “Except that the Lord had shortened those days, no flesh should be saved…take ye heed: behold, I have foretold you all things.” (Mk. 13:20, 23) KJV

First the Man of Sin appears as the false Christ prophesied to come, but at mid-week he morphs into the Beast Son of Destruction Antichrist, denying the Father and the Son and all called God or worshiped as such. But he honors the extraterrestrial forces that enabled his ascension:

36 And the king shall do according to his will; and he shall exalt himself, and magnify himself above every god, and shall speak marvellous things against the God of gods, and shall prosper till the indignation be accomplished: for that that is determined shall be done.
37 Neither shall he regard the God of his fathers, nor the desire of women, nor regard any god: for he shall magnify himself above all.
38 But in his estate shall he honour the God of forces: and a god whom his fathers knew not shall he honour with gold, and silver, and with precious stones, and pleasant things.
39 Thus shall he do in the most strong holds with a strange god, whom he shall acknowledge and increase with glory: and he shall cause them to rule over many, and shall divide the land for gain. (Dan. 11:36-39) KJV

END NOTES
~ Those vehemently rejecting Creationist intelligent design arguments for the existence of God, will be enthusiastic proponents once extra-terrestrials replace God as “The Designers.”

The Fourth Lateran Council separates angelic from corporeal natures, and Petavius rightly characterises the contrary opinion as “proximate to heresy.” At the same time, angels are capable of assuming bodies; to which they are for the time intimately united; which they move and which they use to represent either their own invisible nature or the attributes of God. Passages of Scripture, which imply this, will readily occur to the reader.-Addis, W. E., & Arnold, T. (1887). In A Catholic Dictionary (Sixth Edition, With Additions, p. 25). New York: The Catholic Publication Society Co.

At the transfiguration the “kingdom of God come with power” (Mk. 9:1) implying a point of connection was made linking the heaven and earthly realms, an opening into heavenly TELEIOS (“complete”) and the earthly MEROS (“incomplete”) 1 Cor. 13:10. This point of connection is where Elijah, Moses and Jesus stand and converse in radiant light. That all three were physically standing together and not spirits is confirmed by Peter’s reaction, he wanted to build tents for them (Mk. 9:23-5).

Enoch was translated (3331 μετάθεσις), a transfer not a dematerialization (Gen. 5:22; Heb. 11:5). Paul did not know if he went to third heaven in the body or out (2 Cor. 12:3) which could not be the case if he couldn’t enter heaven physically. Elijah was taken up into heaven in a chariot ascending into heaven through a vortex opening described as a “whirlwind”.

New Jerusalem descends from heaven, it does not materialize on earth and its clear mankind will physically walk its streets (Rev. 21:2-3).

A study of 1 Cor. 13:10 indicates within the meta-universe two parallel universes consist. The more substantial reality is the TELEIOS “kingdom of God”, not our MEROS “that which is in part” because it lacks the dimension of the revelation of God (1 Cor. 13:10-12). In the infinite mind of Christ the Multiverse (meta-universe) consists and has its being (Col. 1:17), in Him both human and angel live and move and have their being (Ac. 17:28). When God appears to the inhabitants of heaven, He does so in the “form of God” (Phil 2:6) just as in our Verse (Ex. 33:23). It is in the Person of the Son Infinite God in two natures can be concretely with either. A theophany is something less concrete. This follows from “in Him all things consist” (Col. 1:17). The Meta-Universe is a thought in the infinite Mind of God the Eternal Son, Jesus Christ.  Therefore,  the mass of the Higgs Boson (125 GeV ) at best is a visible manifestation mass—as massive as a thought in infinite Mind can be.

This does not deny spirits (whatever their nature) exist in heaven (1 Ki. 22:21), only the hasty generalization immaterial spirit is the only nature existing in heaven. Evil spirits and demons wandering the earth longing for the corporeality they lost in the flood (Gen. 7:21-23; Lk. 8:26-33) cannot be confused with Satan and the rest of his angels who retain their physical form (Dan. 10:13; Rev. 12:7-8; 16;13). Only God’s restraining decree (2 Thess. 2:7; Rev. 9:1, 14-16) prevents these from appearing physically now on the planet. Any time after God lifts that restraint is when they can appear, no doubt they will disguised as an extraterrestrial race, as least in the beginning.

In Him All Things Hold Together: The TELEIOS MEROS Multiverse
Who are the spirits in prison? Why are they in prison? What did Christ preach to them?
Nephilim Fallen Angels and the Sons of God
Angels are cast out of Heaven Twice?
What did the apostle John reveal when he said: “It is the last hour”?
Where Is The Judgment Of Fallen Angels?
Do Ancient Aliens Appear in the Bible?
The Coming False Christ and His Followers Revealed
Don’t believe in Hell? Tell us why!