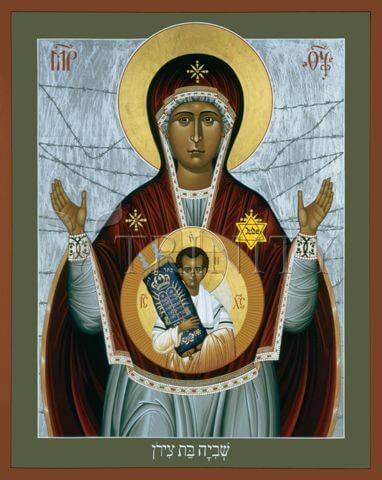 The woman clothed with the sun is Lady Zion, heavenly Jerusalem the “mother of us all” (Gal. 4:26).

Revelation 12:1 And there appeared a great wonder in heaven; a woman clothed with the sun, and the moon under her feet, and upon her head a crown of twelve stars:

This Mega sign appearing in heaven has mega significance.

Sun and moon rule day and night (Gen. 1:26) implying God’s truth is the light that separates and determines what is light or dark and it is the standard by which all deeds will be judged, whether done in light or darkness.

As God’s light comes through Israel and the Twelve tribes the Sun, moon and stars are associated with them (Gen. 37:9-10) and Daughter Zion.

2 And she being with child cried, travailing in birth, and pained to be delivered.

Because she is birthing the child unto persecution by the Dragon she is in pain and torment (Jer. 4:31).

3 And there appeared another wonder in heaven; and behold a great red dragon, having seven heads and ten horns, and seven crowns upon his heads.

Great red dragon is murderous Satan whose collaboration with men and their political entities facilitates his rule over the earth against God. As the greatest manifestation of Satanic/human conspiracy against God is in the end time political entity having seven heads and ten horns (Dan. 7:24-27), the seven crowned heads and ten horns become the cosmic Dragon symbolizing Satan throughout history.

4 And his tail drew the third part of the stars of heaven, and did cast them to the earth: and the dragon stood before the woman which was ready to be delivered, for to devour her child as soon as it was born.

Chronologically this event happened when a third of heaven joined Satan’s rebellion and tried to corrupt the image of God in man genetically with their own DNA(Gen. 6:1-4) and so prevent the Incarnation/Redemption of mankind.

Satan convinced a third of God’s angels God erred (Job 1:5-11) which requires God disqualify Himself as God for then He is imperfect*. We can infer from the application of this argument to Job that Satan originally argued “true love for God doesn’t exist, therefore God erred creating free will creatures believing they would enjoy life with Him in perfect love.” The greatest refutation of Satan’s argument is the perfect love evident (for both God and man) in the incarnation of the Son (Phil. 2:3-8). Likely this indicates why Satan and his demons choke when trying to say “Jesus Christ is come in the flesh” (1 John 4:2).

5 And she brought forth a man child, who was to rule all nations with a rod of iron: and her child was caught up unto God, and to his throne.

Skipping Christ’s crucifixion shows this is telescoped prophecy revealing the constant warfare of Satan against the woman’s seed (Gen. 3:15-16).

6 And the woman fled into the wilderness, where she hath a place prepared of God, that they should feed her there a thousand two hundred and threescore days.

The telescope then focuses on events at the beginning of the end time week.

7 And there was war in heaven: Michael and his angels fought against the dragon; and the dragon fought and his angels,
8 And prevailed not; neither was their place found any more in heaven.
9 And the great dragon was cast out, that old serpent, called the Devil, and Satan, which deceiveth the whole world: he was cast out into the earth, and his angels were cast out with him.
10 And I heard a loud voice saying in heaven, Now is come salvation, and strength, and the kingdom of our God, and the power of his Christ: for the accuser of our brethren is cast down, which accused them before our God day and night.
11 And they overcame him by the blood of the Lamb, and by the word of their testimony; and they loved not their lives unto the death.
12 Therefore rejoice, ye heavens, and ye that dwell in them. Woe to the inhabiters of the earth and of the sea! for the devil is come down unto you, having great wrath, because he knoweth that he hath but a short time.
13 And when the dragon saw that he was cast unto the earth, he persecuted the woman which brought forth the man child.
14 And to the woman were given two wings of a great eagle, that she might fly into the wilderness, into her place, where she is nourished for a time, and times, and half a time, from the face of the serpent.
15 And the serpent cast out of his mouth water as a flood after the woman, that he might cause her to be carried away of the flood.
16 And the earth helped the woman, and the earth opened her mouth, and swallowed up the flood which the dragon cast out of his mouth.
17 And the dragon was wroth with the woman, and went to make war with the remnant of her seed, which keep the commandments of God, and have the testimony of Jesus Christ. (Rev. 12:1-17 KJV)

Satan alleged God erred about Job and could prove it. He would curse God to His face if the selfish motivation for serving God was removed, contrary to God’s pronouncement he was “blameless.”

We can infer the original argument Satan made against God was “He is imperfect and therefore should disqualify Himself from being God.” Only a perfect Being can be God.

Self projection made it inconceivable to Satan and the fallen angels the argument was unsound. Thieves cannot believe others aren’t thieves also under the right conditions. As Satan and his angels discerned iniquity in their service to God (Ezek. 28:12-15) they couldn’t believe it didn’t exist in others. The bet everything they were right.

God permitted Satan a chance to prove his argument. No doubt he found it impossible to believe God the Son would forsake infinite prerogatives of being God for love’s sake.

That Jesus would go further, die the most horrible death (Isa. 52:14) to save others who didn’t deserve it at all, was simply too incredible to be true.

Therefore, the Incarnation of God the Son empirically proved Satan wrong, by two witnesses it is established beyond any reasonable doubt true love exists.

The Son’s perfect love for the Father:

3 Let nothing be done through selfish ambition or conceit, but in lowliness of mind let each esteem others better than himself.
4 Let each of you look out not only for his own interests, but also for the interests of others.
5 Let this mind be in you which was also in Christ Jesus,
6 who, being in the form of God, did not consider it robbery to be equal with God,
7 but made Himself of no reputation, taking the form of a bondservant, and coming in the likeness of men.

The Father’s perfect love for His creatures:

8 And being found in appearance as a man, He humbled Himself and became obedient to the point of death, even the death of the cross. (Phil. 2:3-8 NKJ)

16 “For God so loved the world that He gave His only begotten Son, that whoever believes in Him should not perish but have everlasting life.
17 “For God did not send His Son into the world to condemn the world, but that the world through Him might be saved. (Jn. 3:16-17 NKJ)

16 Then those who feared the LORD spoke to one another, And the LORD listened and heard them; So a book of remembrance was written before Him For those who fear the LORD And who meditate on His name.
17 “They shall be Mine,” says the LORD of hosts, “On the day that I make them My jewels. And I will spare them As a man spares his own son who serves him.”
18 Then you shall again discern Between the righteous and the wicked, Between one who serves God And one who does not serve Him. (Mal. 3:16-18 NKJ)

12 Therefore Jesus also, that He might sanctify the people with His own blood, suffered outside the gate.
13 Therefore let us go forth to Him, outside the camp, bearing His reproach.
14 For here we have no continuing city, but we seek the one to come.
(Heb. 13:12-14 NKJ)

The time clearly is near.