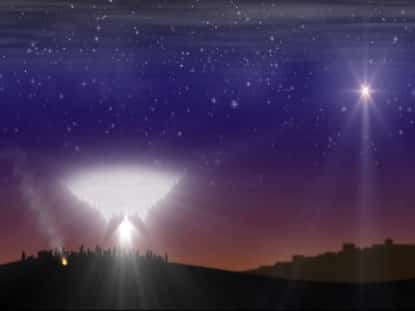 It grew as high as the heavenly army, made some of the army and some of the stars fall to the earth, and trampled them. (Dan. 8:10 CSB17)

How is that possible?

We should start at the beginning.

Daniel’s prophecy (Dan. 8:9-14) has fulfillment in Antiochus (see other commentaries for that) and Antichrist, only the latter discussed here.

Daniel was confused by this prophecy (Dan. 8:27). That is odd because God the Holy Spirit gave him special understanding into enigma (Dan. 2:47; 4:8-9; 5:11-12). From Gabriel’s words we can infer the dual fulfillment was the cause of Daniel’s confusion (Dan. 8:15, 17), but his additional interpretation (Dan. 12:8-9) failed to end it. That follows if the words Daniel heard no longer fit the definitions he knew, their reference to entities in the end time had changed their meaning (Dan. 12:8-9), only those living in the End Time would understand.

Although Gabriel gives both fulfillments, we shall focus on Dan. 8:23 “when the rebels have reached the full measure of sin” (Dan. 8:23-26) because that phraseology telescopes it to the end time of the Antichrist (Dan. 8:17, 19).

The heavenly hosts are God’s heavenly army, the stars captains among them

9 From one of them a little horn emerged and grew extensively toward the south and the east and toward the beautiful land.
10 It grew as high as the heavenly army, made some of the army and some of the stars fall to the earth, and trampled them. (Dan. 8:9-10 CSB17)

Nephilim “fallen angel” technology with the energia of Satan (2 Thess. 2:9) permits the Antichrist defeat some of the angels of God’s heavenly army, even some of the Captains (stars) among them:

[This hardens the hearts of all not found in the Lamb’s book of life, just as God permitted Pharaoh small success strengthening the delusion he could resist God and live (Ex. 7:11-12, 22; Rom. 9:21-22)]

24 And his power shall be mighty, but not by his own power: and he shall destroy wonderfully, and shall prosper, and practise, and shall destroy the mighty and the holy people. (Dan. 8:24 KJV)

In the end they issue in the “little horn” figure (v. 9) already seen in ch. 7—the final anti-Messiah who will arise when the sins of the “four kingdoms” have reached their full measure (v. 23), and about whom we now hear much more. He is of bold countenance (he looks hard or insolent) and devious (v. 23), destructive (v. 24) and arrogant, even to the point of rising up against the Prince of princes (v. 25)—making a blasphemous attack on God himself. Here is a god challenging the true God, as kings characteristically do in the OT, with no awareness of this God’s true nature. This latter passage is difficult both because of uncertainties in the Hebrew and because of the mixture of metaphor and more straightforward language that it contains. At one level it again concerns arrogant action against heaven, the “host of heaven” being a phrase often used of the heavenly army of angels (e.g., 1 Kgs 22:19–20) or simply of the sun, moon, and stars (e.g., Isa 34:4). The anti-Messiah is someone of great ambition, reaching for the stars and throwing them down (cf. Isa 14:13–14), confronting the prince of the host (God himself? one of his angels?) in doing so. At another level, however, the passage seems to concern physical warfare on earth—the battle results in real consequences for Jerusalem. The spiritual and physical realms are linked in warfare in Daniel as elsewhere in the Bible (e.g., Josh 5:14; Dan 10:20; 11:1; 12:1; Eph 6:10–20)—what happens in one realm affects the other. It is perhaps not surprising to find such a reality reflected in 8:10–14 as well—but it does make interpretation of the passage difficult.-Provan, I. (2003). Daniel. In J. D. G. Dunn & J. W. Rogerson (Eds.), Eerdmans Commentary on the Bible (pp. 672–673). Grand Rapids, MI; Cambridge, U.K.: William B. Eerdmans Publishing Company.

“He shall destroy the mighty and the holy people.” Believers are “the holy people”, “the mighty” are their angelic protectors (Heb. 1:7, 14; 1 Cor. 11:10), when the power of the Holy People is destroyed, the elect angels yoked to them is also.

It acted arrogantly even against the Prince of the heavenly army; it revoked his regular sacrifice and overthrew the place of his sanctuary. (Dan. 8:11 CSB17)

As noted earlier, the double entendre in “the daily” and “the sanctuary” likely caused Daniel’s inability to understand the vision (Dan. 8:27), the vision of end time events just didn’t match the words Gabriel spoke (Dan. 12:8-9).

The Daily taken away is their daily sacrifice to God in Christ:

When the Man of Sin is revealed he comes as the false Christ, and the apostate church received him. Therefore, ending the Daily Sacrifice is a mutual apostasy (Dan. 12:11 “taken away” 05493 סוּר cuwr, “to turn aside, depart). He demanded, they, enthusiastically complied.

The Sanctuary the church is cast down, TARES have overrun its outer courtyard (Rev. 11:1-2).

In the rebellion, the army was given up, together with the regular sacrifice. The horn threw truth to the ground and was successful in what it did. (Dan. 8:12 CSB17)

Truth is cast down, replaced with the strong delusion “ancient alien theory” is correct, and that God is an Extraterrestrial. He is purged from revisionist history in an attempt to change times and laws (Dan. 7:25). All concepts of God are cast down (Dan. 11:36-37), the Antichrist opposed them all exalting himself (2 Th. 2:3-4) as an Extraterrestrial whose alliance with the Dragon renders him invincible. This is the blasphemy of God’s Name and all who dwell with Him, calling them an inferior extraterrestrial race (Rev. 13:6)

3 Then I heard a holy one speaking, and another holy one said to the speaker, “How long will the events of this vision last– the regular sacrifice, the rebellion that makes desolate, and the giving over of the sanctuary and of the army to be trampled?”
14 He said to me, “For 2,300 evenings and mornings; then the sanctuary will be restored. (Dan. 8:13-14 CSB17)

So when precisely do we see the Church’s faith in God justified, them made right for believing in His Name?

That happens in the book of Revelation, about 2, 300 days after the start of the end time week. The church is vindicated, God’s judgments are manifested and they stand before Him on a sea of glass in heaven, singing the songs of Moses and the Lamb:

2 And I saw as it were a sea of glass mingled with fire: and them that had gotten the victory over the beast, and over his image, and over his mark, and over the number of his name, stand on the sea of glass, having the harps of God.
3 And they sing the song of Moses the servant of God, and the song of the Lamb, saying, Great and marvellous are thy works, Lord God Almighty; just and true are thy ways, thou King of saints.
4 Who shall not fear thee, O Lord, and glorify thy name? for thou only art holy: for all nations shall come and worship before thee; for thy judgments are made manifest. (Rev 15:2-4) KJV</blockquote

The Antichrist: His Names Titles and Descriptions
What did the apostle John reveal when he said: “It is the last hour”?
Where Is The Judgment Of Fallen Angels?
Do Ancient Aliens Appear in the Bible?
The Coming False Christ and His Followers Revealed
A Cutting Edge Forum for Politics and New Ideas